Nicola Beer (Minister of Education for the state of Hesse)

Macbeth is one of my favorite books from my school days. The great writer Shakespaere created a large number of various characters in this drama, which opened a huge opportunity for the study of human destinies and the tragedy involved in these events.

A wonderful book from Frankfurt author Phyllis Kiehl. It is about a revolution in a diet clinic.

(no specific book)
by Lee Child

I love reading Lee Child because of the pace of his stories. He writes real page turners and it really takes your mind off and away. His stories are absorbing and at times you find yourself travelling through 6 different locations within 4 pages. Nothing worse than a long winded bla bla bla to fill the 800 pages, a writer committed to the publisher…

The book Business Location Germany illustrates for me how essential this city is, not just in Europe, but also in a Global context.

I read Oliver Twist for the first time when I was a teenager. I could dive into a distant world that fascinated me, despite the poverty and suffering of the main character. That Oliver is portrayed as a hero makes a great story, does it not? The complexity of Oliver’s experiences, the intense depiciton of different characters, and the stark and ever-present contrast between good and evil has had a great impact on me. From today’s perspective, I can say that the topics Dickens deals with – child poverty and equality of opportunity – are highly important in my work. Dickens has also influenced me politically.

Kraken is one of the most extraordinary works of visceral, kinetic literature I have yet to encounter. Read it and you will enter a very unique universe of thrilling impossibility.

Dancer from the Dance
by Andrew Holleran

My book, Dancer from the Dance, by Andrew Holleran, is widely considered to be one of the most influential gay-themed novels of the 20th century. Holleran was one of seven members of the influential Violet Quill Club, which, starting in the early 1980s, collectively and via their own strong individual literary voices, transformed American LGBT-themed lit from being overly focused on and characterized by melodrama, bitter self-deprecation, desperation, and doom to much more positive, celebratory, and life- and friendship-affirming themes in the post-Stonewall/pre- (and early-AIDS) era. Holleran and his cohorts’ writing and public discussions of burgeoning but still-limited LGBT freedom and rights have influenced the lives of millions of LGBT (and straight, for that matter) Americans, including helping many young gay men and women (e.g. me) as they’ve come out and made their way in American life.

Animal Farm by George Orwell was the first serious piece of English literature that I read. The seemingly naive and witty portrayal of the insidious perversion of an idea impressed me enormously and became so deeply ingrained that several of the book’s scenes are still present in my mind today. The passage beginning with “All animals are equal, but…” not only marks the failure of Socialism in the former Soviet Union, but also continues to confront us in our society today.

The Triumph of Propaganda
by Hilmar Hoffmann

The book is essential reading for anyone interested in the suggestive power of film and the dynamics of Nazism.

David Constantine has translated German literature into the most beautiful English. He has translated Goethe, Kleist, and Hölderlin and has made our classics accessible to Oxford students and English speakers worldwide. I have always taken great pleasure in his readings and translations.

Barbara Bush is certainly among the most popular First Ladies ever to live in the White House. Politics aside, people worldwide admire her wit, her candor and compassion, as well as her unswerving devotion to her husband and her children. I have the honor to personally know the First Lady and most family members. I have had the opportunity to sit and discuss with her and her husband at their home in Kennebunkport. She is an amazing woman. She was once chosen to give a Graduation Speech at Smith College in Massachusetts, a leading women’s college in the USA. A large group of students protested, saying she was not a business leader but rather just a housewife. How wrong they were! Barbara Bush is the Matron of a family that included at least 2 Presidents and 2 Governors…..we will see what happens in 2016, maybe 3 Presidents!

The Picture of Dorian Gray
by Oscar Wilde

At age 17 I spent my summer vacation with two friends at Lake Garda like a bookworm – sitting and reading on the lake’s shore. I read through all the books I had brought with me in no time. In my desperation, I turned to our English class’ required reading list that my friend Isabella brought with her. With the help of a dictionary, I devoured Oscar Wilde’s “The Picture of Dorian Gray” in less than two days. This marked the beginning of my great love for the English language, which sadly no teacher had yet been able to instill within me. Ever since that time I have read almost exclusively in English. While I first adopted this habit only to slow my voracious consumption of books, I soon realized that this was the simplest and most enjoyable way to teach myself English!

The Imperfectionist
by Tom Rachman

A quirky and inventive novel about a newspaper and those who work there – absorbing, insightful, and well written.

It is simply the best work in contemporary English fiction! I am fascinated by the intelligent and vivid description of the frailty of contemporary urban life: the possibility of a sudden encounter with senseless violence is always lurking around every corner and there is only one truly sustainable way to deal with it – the healing forces of literature, that is to say: civilization. 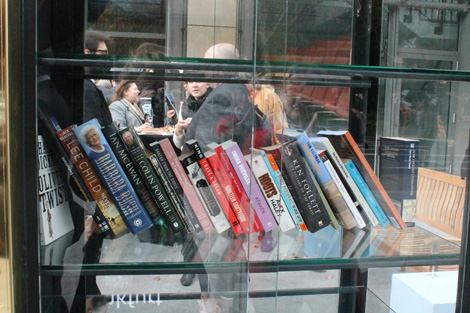 Goethe is in Frankfurt, in our private bookshelf, and now in the English Bookcase! Read more in Goethe’s Faust part 1.

The biographical play, “Breaking the Code” was staged in 2012 to honor the 100th birthday of the brilliant scientist Alan Turing. Andrew Hodges’ biography, “Alan Turing: the Enigma” was in this time “our Bible.” The mix of spying, espionage, Nazi Germany, and the Cold War is very exciting. Turing is not portrayed as a gay hero. He was probably highly complicated, quirky, yet touching. But overall, I want people to know that Turing is simply “a really good read.”

The digital revolution and living in the app-era is improving our economy, making life much easier in many facets, and changing how we communicate. Yet, it is an innovation that is also threatening our civil liberties and our freedom. To me, 1984 and Brave New World are brilliant reminders of how important data usage and protection are to preserving and growing our civil rights and our freedom.

It Worked for Me
by Colin Powell

As a son of Jamaican immigrants growing up in the Bronx, Colin Powell learned just how one person can achieve the American Dream and have an impact on a world much bigger than they ever thought. “It Worked for Me“ is an autobiography by Colin Powell, that takes us through his life, starting with his first jobs. Where through hard work he became the first African-American in a soft-drink bottling plant and then on to Reserve Officers’ Training Corps at City College of New York after which he would serve two tours in Vietnam. Powell helped tear down racial divisions by becoming the first African-American to hold a “four-star troop command” as general in charge of all stateside Army forces. He would then go on to become Secretary of State for President George W. Bush. Colin Powell is not only a role model for hard work and dedication but also a testament to the modern American Dream and the role an individual can play in Human Rights.

Dr. Lutz Raettig Chairman of the Supervisory Board of Morgan Stanley Bank AG)

I Have a Dream
by Martin Luther King Jr.

Martin Luther King, Jr. not only changed the United States, he changed the world. His commitment to equality and justice is still having an impact today.

The Next Asia: Opportunities and Challenges for a New Globalization
by Stephen S. Roach

Stephen Roach has taken a closer look than most at China and its influence on the non-Chinese world.
In many ways, his findings should serve as a guideline for our future actions.

The Way We Live Now
by Anthony Trollope

Anthony Trollope’s works are often overlooked by the reading public. This hilarious novel describes Victorian conventions, but it reads today as a modern novel. A brilliant social satire and a very touching story!

I read The Great Gatsby at school when we dealt with the topic of the American Dream. Whilst the American Dream includes a set of ideas in which freedom includes the opportunity for prosperity and success and an upward social mobility achieved through hard work, Fizgerald describes in his novel the roaring 1920s, the so-called jazz age, which are a synonym fort he failure of the American Dream in an era of unprecedented prosperiy, material excess and decayed social and moral values – an entertaining reading.

I believe it was in the beginning of the 80th that I saw the TV-serial about Kunta – a African young man who is sold of into slavery. I was so impressed that I bought the book. A gripping saga portraying 7 generations of an Afro-American family. A stirring book about the history of slavery in the USA.

The Client
by John Grisham

While doing an internship in New York in 1994, I wanted to improve my English. “The Client” was for me the best choice because I really liked “The Firm” and the style of story telling. And as it was still a popular novel at that time, I found many people to talk with me about the book.

A number of years ago I heard about Kathy Reichs, an anthropologist and thriller writer from the United States. It was the beginning of a love affair with her writing that has continued to this day. I’m a big fan of detective novels and have now read almost all of her books. One of the best is “Fatal Voyage”, from the series featuring Dr. Temperance “Tempe” Brennan. Reichs’ simple style always fascinates me, as does her taut, realistic plots, which are never boring or clichéd. “Fatal Voyage” is one of the best thrillers that I’ve ever read, and the reason is its very realistic nature. You can directly sense Reichs’ many years as a forensic anthropologist. Nothing seems artificial, neither the story nor the characters. I loved “Fatal Voyage” and it’s definitely one of the works to be found high up on my own personal list of bestsellers.