Strangers on a Train

Strangers on a Train is canceled due to extension of Saturday Night Fever.

I still think it would be wonderful to have a man love you so much he’d kill for you.

This fast-paced and brilliantly crafted thriller, filmed by Alfred Hitchcock in 1951, revisits the theme of evil that lurks just below the surface of everyday life. The story involves two young men who meet on a train; one is an ambitious architect Guy Haines, and the other Charles Bruno, a playboy with a taste for danger. Suppose these two men each have someone they’d like to get rid of. Suppose one of them proposes they switch murders – each has no motive to kill the other’s victim. Of course one doesn’t take it seriously, at first…until a perversely enjoyable battle of wits starts and an innocent joke between two strangers proves deadly in this chilling Hitchcockian thriller.

Oscar nominated adaptation based on the novel by Patricia Highsmith was filmed by Alfred Hitchcock in 1951. 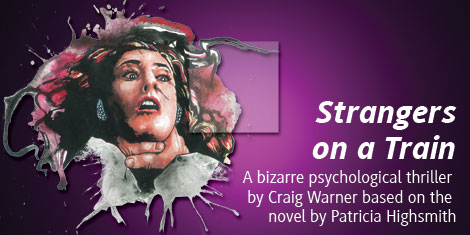